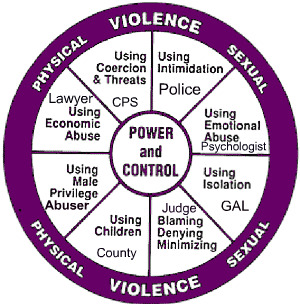 For many abused women the above “wheel of abuse” will be familiar although changes have been made to reflect that the abuse that some women have endured is continued in the Family Court system. The statistics are nauseating, the American Psychological Association’s Presidential Task Force on Violence in the Family, the leading review of the research as of 1996, found that men who abuse their partners contest custody at least twice as often as non-abusing fathers. Makes you wonder what the statistics would tell for 2009. (American Psychological Association Presidential Task on Violence in the Family, 1996 at p. 40. )

The Family Court system is not set up to resolve “high conflict” divorces/custody disputes, they are set up to instigate, aggravate and allow your abuser to continue the circle of abuse all in the name of greed and professional gains.  All figures in the Family Court system profit in some form or another (legally and illegally) and everyday women and children are placed at risk by abusive men.

As we’ve seen in the Judge Garson case in New York, where he accepted bribes by his favorite court appointed Guardian Ad Litem.  According to Michael F. Vecchione, chief of the district attorney’s Rackets Division and also lead prosecutor at Garson’s trial said, “This was an overwhelming case of greed, of him selling his office for drinks, lunches, dinners and gifts and a violation of the trust voters and citizens of Brooklyn placed in him”. Judge Garson is not an isolated incident this happens everyday in Family Court.  In order for change to begin then we must make these elected officials accountable and expose the dirty little secrets of the Family Court, this is the mission of many. Action is needed as we speak to expose the greed and corruption.  As anyone who has faced abused, survived, moved on and empowered yourself we will also stand up to our abuser, Family Court and say, ENOUGH!